60/20 Tour: A New Perspective, My Own Learning Journey and Awe in Copley

We take our first tiptoe into the Buckeye State and, appropriately enough, head to Ohio Living.  They were our first Ohio customer many moons ago.  Memories of “selling” to them in the early 2000s flood me as I drive into the community.  I negotiated our first deal with Ohio Living with Joyce Miller Evans. A super-smart head of IT,  she always bested me when we got down to the wire on pricing!  One of the most enjoyable parts of this journey is walking into communities and not being compelled to “sell”. This hit home hard when Joyce was there to greet Leslie and me.  I saw Joyce in a whole new light; she was not the tough negotiating technology leader. In this context, she was virtually an Activity Director.  She was dancing with the residents,  helping us with the OSU fight song, even cranking out a mean karaoke.  So many people get into this field because they are simply drawn to a love of older adults. Joyce epitomized that to me as I watched her in action.

Larry Gumina,  Ohio Living’s CEO,  joined us for crooning along with Dana ( the HR director) and her mother Beverly.  Dana is a walking encyclopedia of Ohio trivia.  If it’s a category on Who Wants to Be a Millionaire, she’s my phone-a-friend.  During a memorable run through the streets of Columbus, it’s poignant to watch Dana and Beverly interact.  I’m learning on this trip about the joy of letting people with dementia flow from one conversation and stream of consciousness to the next.  There’s some sense of purity to it when they can meander,  and Dana so seamlessly lets her Mom do exactly that.  Larry cranks out a mean tune or two and helps clean our windshield along the way.

In the afternoon we set off to Concordia at Sumner in Copley. We walked up to a big gazebo with live musicians and dozens of residents all decked out.  We had no idea what the occasion was until we got close to the extravaganza.  When we saw our driving simulators up and running, we knew the party was for us!  It was an honor to meet so many people (Erin,  you’re remarkable). We also had the opportunity to have a fantastic conversation with Charlene Kish, the woman who helped write the grant for our systems. Humility galore resides in senior living management,  as I find out later, she is the CEO!  After the party hijinks are over Erin takes me to a woman who wanted to meet me. It turns out she was a beautiful,  accomplished, elegant woman (I’ll keep her name to myself) who began a brutal dance with MS in her 40s.  The disease has taken away a lot of her functionality and her ability to be independent,  but it hasn’t touched her spirit.  She smiles, she is thankful,  she is joyous.  In a day full of such pomp and circumstance, my conversation with her will last me the rest of the journey. 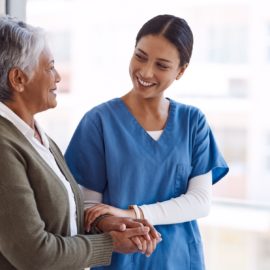 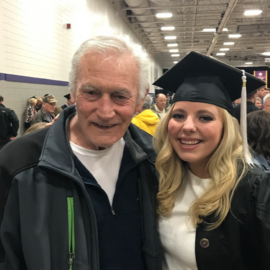