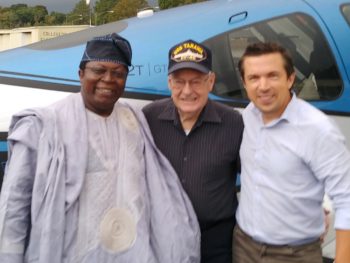 You can’t make this stuff up!  Tammy Marshall coordinated a remarkable day. Doing proper justice to the day’s events is almost too long to put into one daily post.  Picture it: it’s a pitch-black 6:30 a.m. and  Francis and I are wandering around the Peachtree regional airport in Georgia. News crews are filming the experience as we walk around the plane. We’re getting ready to have Thrive Senior Living take Francis, a veteran and me for the ultimate cruise and croon – up in the air!  Jeramy Ragsdale has a small, ultra-cool private plane ready to go, so we climb in,  ascend into the clouds, and soon we are cruising and crooning as we fly parallel to the sun rising over Atlanta.  What are the odds that I would be here with Francis from Cameroon, and Charles Bullock from Thrive (a decorated veteran and resident) at this moment in time? The world is crazy.

The flight was marvelous. It was fascinating to see how Charles reacted to the technology Jeramy seamlessly navigated, and how he compared flying in the 1950s to 2019.  Francis had never been in a small plane before. As I watched his face glued to the window as the sun magnificently rose to his right, I thought about how that must have felt to him.  And I had some cool reflective thoughts of my own,  wishing my brother Tom was somehow there with me.

Today the tour was officially the 60/20/10 tour. Thrive is celebrating their 10th anniversary this year,  and rather than throw a big party to celebrate their success, they pumped the money into resident wishes. What an appropriate idea. After our flight, we co-granted with Thrive the wish of a 101-year-old to take an Alaskan Cruise and did a cruise and croon with a brigadier general at their community in Lookout Mountain. We then drove back down from Chattanooga to Roswell to cruise and croon with a family for another wish – taking resident Wilson (Bill) Dreger on a tour of some meaningful parts of his journey over his 88 years of life.  And this man turned out to be a brigadier general – wow!  He bestowed pearls of wisdom galore as we took a tour of his old office and toasted a life well-lived from a rooftop bar.

What a day! What a journey this is! I’m so fortunate to be able to enjoy days like this. Tammy, you rock!  Jeramy and Les, you guys have helped build a remarkable organization!  “Safety third” –   I love it!!!  That’s an appropriate metaphor for this entire trip. 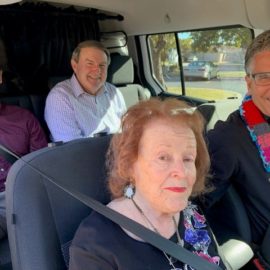