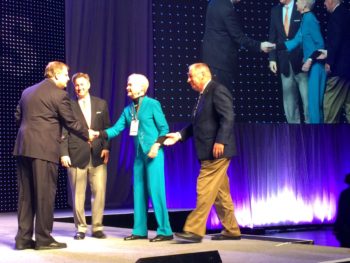 Since 1999, iN2L has always believed in the positive effect of iN2L’s engagement systems. This belief was found to be true this year as iN2L’s technology was the focus of a study, known as the Birdsong Initiative, that took place at the senior living community Westminster-Canterbury on Chesapeake Bay. The study showed that people living with dementia enjoyed an improved quality of life, reduced depression and lowered stress levels after using the technology. Yesterday, Westminster-Canterbury accepted the 2016 National LeadingAge Award for Excellence in Research and Education. Let’s read on to learn the details of the study and more about how residents at Westminster-Canterbury benefited from iN2L’s systems.

About the Birdsong Initiative

Dementia takes a toll not only on the people afflicted, but on family, friends, and caregivers. Anything to help ease symptoms and slow the disease’s progression is considered a win. Technological advancements have helped significantly in the healthcare and eldercare sectors, so what can it do to help dementia patients? This was the goal of the Birdsong Initiative: how might customized engagement improve their quality of life?

In-depth studies require cooperation from many parties and the Birdsong Initiative was no different. The study brought together Westminster-Canterbury on Chesapeake Bay, Eastern Virginia Medical School, and Virginia Wesleyan College. Determining an appropriate timeframe is also key: the Birdsong initiative lasted 24 weeks, from June to December 2015. Study participants lived in the Holy Nursing Care Center of Westminster-Canterbury. Thirty-one dementia participants were given engagement systems while another 31 participated in traditional activities. After twelve weeks, the groups switched.

Results from the Birdsong initiative were, in a word, encouraging. The study’s investigators found that participants had higher cognition scores, less severe behavioral episodes and lower depression rates after using iN2L’s engagement systems. Statistically significant improvements on the Affect Balance Scale (an indicator of life satisfaction and well-being) were also found in patients. After only 5 hours of training, participants were using the technology up to 25 hours per week! Westminster-Canterbury CEO Ben Unkle explained that the findings were “game changers,” working against the long-held belief that dementia patients can’t learn new things.

Benefits from iN2L’s technology weren’t limited to the patients. The study found a statistically significant lower level of stress on the caregivers as measured by the Perceived Stress Scale. Westminster-Canterbury also hasn’t needed to request additional staffing following the initial training. A technology that benefits everyone involved, who could ask for anything better?

Heading to the LeadingAge Awards

The study’s promising results caught attention nationwide, including LeadingAge. With more than 6,000 members, this charitable organization is made up businesses, foundations and more and focuses on aging education, advocacy, and research. Each year, LeadingAge recognizes contributions to aging and eldercare. Awards are given in ten categories that cover all aspects of the industry, including the Public Trust Award, Innovation in Care and Services Award, and others.

Westminster-Canterbury is proud to accept Award for Excellence in Research and Education this year. “We are thrilled that iN2L engagement systems were involved in this study and that now the results have received national recognition,” Jack York said when the winners were announced in September. He particularly highlighted that iN2L’s technology could “bring joy during a tough time in life.” As anyone who knows someone living with dementia understands, joy is something that comes far too infrequently. Anything to help ease the burden of the patients and their loved ones can help in powerful ways. With iN2L’s technology, this is possible. Jack is seeing his vision come true.

If iN2L’s technology has helped dementia patients in such a powerful way, how else can it help seniors and those involved with eldercare? Unkle explained that the center will continue to work with academics for finding ways to improve aging. Currently, the Birdsong Initiative is planning additional studies and is also offering consulting services for others wishing to bring this technology to their residents. For more information about this study or for consulting services, contact Aisha Azher of Westminster Canterbury.