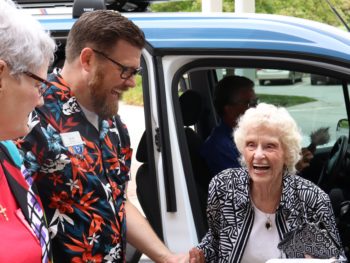 Another day of cruising and crooning in Nebraska! My day starts with a visit to Immanuel Village in Omaha, one of multiple communities owned by Immanuel, an innovative organization embracing iN2L in several of their communities.  Cameo Rogers, Corporate Life Enrichment Manager, as is usually the case, has choreographed the day into minute by minute increments. Her only fear (she has known me for a LONG time) is Jack jumping off script.  We joined some exuberant residents from their independent living community for a cruising and crooning adventure. Watch out for Bobbie! Jacob Schultz, Executive Director of Immanuel Village, joins in on the ride.  I know his Cameo-provided instructions are to make sure I enjoy all the scenery on the Immanuel Campus, and he does well playing the role of navigator a few times on the ride.

It’s a fun cruise hanging with the Immanuel residents. But Cameo had something up her sleeve for the next visit. She arranged for Stephanie Lewis and Kaitlyn White, two rec therapists from Immanuel Fontanelle, to ride.  Coincidentally, Jenifer Acierno,  ED of LeadingAge Nebraska, and Michael Calogero from Select Rehab were able to come along as well!  It’s always so exhilarating to see younger people embracing senior living as a career, but so many never contemplate it as an option. The public perception can be more negative than is warranted, but there is so much joy to be had.  So, this cruise turned into a really heartfelt public service announcement about why senior living is a phenomenal career choice for young people,  and Jennifer was able to provide a broader perspective.  One of my dreams for the 60/20 Tour is to have people outside of the cocoon of senior living watch the stories. I never thought of this possibility from a staff standpoint, but once again Immanuel’s creativity sparks a new way of thinking.

Then I cruised from Omaha to Lincoln, a drive that holds so many memories for me, as our summer vacations were always trips to Nebraska. The drive seemed so far then. On the 60/20 Tour it’s like a trip around the block!  I was delighted to hook up with Greg Joyce and three residents from Legacy Retirement Communities.  It was the ultimate infomercial for Greg, as these cool folks were SO thrilled to live at Legacy. Greg could just sit in the back seat and listen to rave about his awesome communities in Nebraska.  A 60/20 bucket list item was checked off when were we able to chant “Go Big Red” in the middle of our cruising and crooning…