60/20 Tour: An iN2L Honor to Visit the Iowa Veterans Home 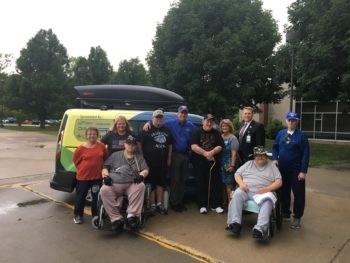 One of my most heartfelt joys with iN2L over the last 20 years has been working with the multitude of state veterans nursing homes that use our technology.  Part of it for me is historical – my dad was a civil engineer and ran a crew of several hundred people building airstrips in the middle of Burma India in WWII at the age of 22.  And I’ve always been fascinating by the stories of heroism and selflessness displayed in the armed forces. I never served but have so much respect for the people who did.  The veterans homes are run by men and women with their own stories of valor,  and as their service careers have wound down many of them have found themselves operating nursing homes throughout the U.S. that serve veterans.  I’ve been to probably about 15 or 20 over the years and want to go to many more.  My first veterans home stop on the 60/20 tour is the Iowa Veterans Home in Marshalltown Iowa. What a moving day it turned out to be.

Emily Hall, longtime iN2L fan for the veterans home, was instrumental in getting the 60/20 Tour visit set up. She had reached out to me a few weeks ago and we had to make it happen. To my delight,  she had choreographed having both Commandant Oujiri and Elizabeth Ledvina (the director of the County Veterans Affairs and a key cog in getting iN2L systems funded in the home) take part in the visit.

Part of what has been exhilarating for me during this tour is the range of emotions and experiences that are happening daily. Most of the time it’s joy, fun and changing perceptions through laughter. But today, there was all of that (the vets were hilarious!) but there was also some intense depth to the cruise and croon. The grounds of the community were beautiful – a glorious part of the state – and right in the middle are rows and rows of solemn tombstones,  a chilling reminder of what these men and women have sacrificed so that we can lead the lives we lead.  It was powerful.  We drove through the cemetery with two different sets of vets, once singing “God Bless America” and the then singing “The Star-Spangled Banner”,  the second time with the commandant in tow providing meaningful commentary.

After that solemn moment passed, we had a birthday party in the general area and I was able to meet some of the men in the community. Their stories hit me in the gut.  Particularly one man,  just a few years older than me, whose whole life course changed through an encounter with Agent Orange in Vietnam.  I’m able to drive around the country having birthday parties every day,  this man has a brilliance in his mind you could sense,  but it is trapped in a body that struggles to communicate verbally.  My time with him will stick me throughout the journey.

Thank you, Emily, for choreographing such a meaningful experience.