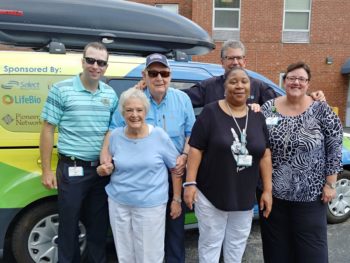 I’m already so inspired by the folks I’m meeting on the 60/20 Tour! Yesterday I was blown away by the wisdom of Ms. Henley from Nazareth Home.  I guess I’ll start learning to expect the unexpected, but I certainly wasn’t looking for a love story straight out of Hollywood casting! I love how communities are encouraging an eclectic mix of residents to go cruising and crooning; Christian Care in Louisville decided to bring a married couple into the mix.  Mr. and Mrs. Hall have been married 53 years, and they’ve still got game!  How do you capture that adequately on a few GoPro cameras?

We climbed into the 60/20 van and just started talking. They made me feel like I’d known them for 20 years.  It’s not just that they’ve been married so long, it’s that they both took giant risks in an era when it was culturally frowned upon. They met at the bowling alley, he gave her a ride home,  and they were married 2 ½ months later.  She was a widow with 5 kids and he didn’t think twice, he just jumped off the cliff of love. Wow! I gave them some alone time in the back of the van with the cameras rolling after our crooning cruise around the block. Who knows how that will turn out?  Jackie, Mary Lynn and the whole Christian Care Team really did it up!

Then onto Masonic Homes. Speaking of expecting the unexpected,  Courtney will always deliver!  Two local men – Mr. Lelaurin and Mr. Kirchner,  were bantering about the real estate in Louisville as we drove around town, and suddenly Mr. Lelaurin expressed his hankering for some Vietnamese pho.  What?  It’s Kentucky!  Where is the bourbon request?  Sir, we will get you some pho!  And then at another Masonic community, we picked up the self-proclaimed Masonic Divas – three bubbly women who were hoping I would drive them to Chicago!  You’ll see them soon! The van keeps rolling…