A Cameroonian Visit to DC 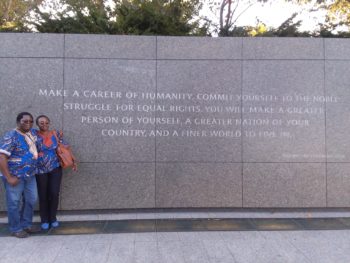 Our first trip as road warriors was upon us. We drove from Boston to Washington DC. The roads of Cameroon are an adventure with plenty of potholes staring at you from all angles. So, when Rosie and Francis climbed into the back of the nice SUV and the smooth roads of the US chewed up mile after mile, you can guess that within a few minutes the Knight of Cameroon and his wife were snoring. It’s clear there would not be a lot of conversation on these drives – our guests were out in a flash!

I rerouted the drive to Gettysburg. One of the joys of these journeys with Francis has been seeing the United States through the eyes of citizens of a country 7000 miles away. Americans obviously see the Civil War in the rearview mirror. From their perspective, with current unrest existing between the French portion and the English portion of Cameroon, they have a whole different take. The danger of foolhardy decisions leads directly to the loss of life. From anyone’s perspective these battlefields of Pennsylvania always leave me amazed and perplexed at what mankind can do to each other.

We had a raucous dinner in Maryland with a group of longtime friends (long live AESU). The Sciout’s cranked out brick fired pizza. A group of people who randomly met almost 40 years ago welcomed the Cameroonians in grand style. Thanks to Nathan for hanging out with your Dad for an evening! After a full Sunday of Washington DC sightseeing, we wound up getting free passes to the Fall Tour of the White House grounds. It was nice to be reminded that current realities and frustrations never last and the office is bigger than any one person.

On Monday we were back on the road to one of iN2L favorite communities, Integrace in Maryland. Cindy Yingling, as always, was a gracious hostess. Francis and Rosie saw true person-centered care in action! Integrace is an ideal bellwether of simultaneously partnering with iN2L and CDVTA. We are creating an exchange program put together between nurses in Cameroo

n and CNA’s from Integrace, shrinking the world as we go. What Jackie and her team put together is always exhilarating to iN2L. It was cool to have Kristi along for the ride for this visit.

We made a mad scramble to the airport and we were off to the heartlands – heading to Iowa!