Brilliance in the Valley of the Sun 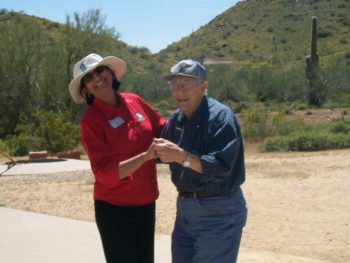 Let’s take a break from politics and head down to Arizona, the Valley of the Sun. If you squint into the sunlight you can find two remarkable individuals who are rewriting the playbook of working with older adults and dementia. In the spirit of what makes our country so remarkable, these two have come from thousands of miles apart to make the world a bit wiser and more compassionate in dealing with the greatest generation. My only disclaimer is that they are both customers of iN2L and they are both friends of mine!

ney starts in Mesa, where the irrepressible Jon Scott Williams takes center stage. Jon is a larger than life figure, literally and figuratively. He has a unique combination of humility and gravitas – you know when he walks into the room. I’ve known Jon off and on over the last decade but I had the privilege of seeing him in action the last couple of years.

He invited me down to see the construction of his state-of-the-art community a couple of years ago. I love meetings like this – usually people will sit down and talk about their vision, their culture and how they see meaningful engagement being a part of the experience they want to deliver. Usually that message is delivered from inside an office. Not with the big man. He invited me in during construction. We dug into the bowels of the building, ducking construction guys on stilts throwing drywall back and forth at each other.

My dad was a civil engineer, usually quiet, but when he got into some piece of construction conversation a light switch would turn and he would become a new man, a conversationalist all full of vim and vigor. So too with Jon Scott. He knew the construction crew by name. He knew what they were supposed to be accomplishing every day and that no details were being missed. He was hands on, baby! I had no idea about most of what he was talking about, but his enthusiasm was infectious, and I knew when to nod to act like I was staying in synch with his

Jon’s story is a good one. His humility obviously coming from an eclectic upbringing from his parents who navigated their way through migrant farm work to careers at General Motors. By the time he was12 he had lived in over 15 states. He wound up in AZ at 12 and, in his words, has “fallen in love with everything Arizona, God’s special creation.” His journey into health care was a circular one. After earning his ASU degree, he was the chair of the board of elders at Central Christian Church when members of Christian Care asked him to help develop a sustainability plan for their struggling organization. That was over 30 years ago, the time has flown by, he has never looked back as his avocation became his vocation. Christian Care is now the largest not-for-profit senior living organization based in Arizona.

The list of accomplishments and accolades is too long for this article, both business-wise and health care-wise, needless to say he has been able to navigate that tricky line of financial sustainability without losing his own, and the organization’s sense of mission. Here’s a teaser of how he has been recognized.
AzAHA (pre Leading Age) awarded Jon Scott the Best Practices Award for 2003. In 2014, he received the “Award of Honor” the highest professional designation awarded by LeadingAge-Arizona.

s are great, but what I like about Jon is that he is truly a nerd at heart. He has more gizmos, knick-knacks and ideas floating in his head technology wise than anyone I know. He’s the guy you want feeding you answers if you’re on Jeopardy. When I asked him about his hobbies his answer was, “I spend hours reading about creation. Currently I am learning the Hebrew alphabet and, for brain development, I study nanotechnology. I enjoy quiet walks in a light rain and, when I take time off from work, hiking the many beautiful Arizona trails.” Tell me that wouldn’t be the ultimate dating profile!

Let’s head across town and shoot over to Sun City West, where the remarkably passionate and talented Bhakti Gosalia works as the executive director at Grandview Terrace, a community in the Sun Health family. Bhakti also has her own sense of gravitas. She looks you in the eye when you talk to her, she listens, she is respectful of every person she interacts with. But her passion runs deep, you can see it in her eyes when she talks to you about aging, culture, dementia and motivation. I have known her for over ten years, her becoming a customer of iN2L was better than getting the Good Housekeeping Seal of Approval.

Bhakti’s own journey to the US is also remarkable. She was born, raised and educated in India. She immigrated to the United States after earning her first master’s degree in social work in 1985. Then she moved to Arizona in 1987 to be with her family who immigrated from India few years before. She has never looked back.

Her upbringing had a dramatic impact on her journey. Bhakti elaborates, “The Indian culture is very respectful of our elders and children, as a rule, expect/plan to be actively involved with their parents as they age; so, a career in senior care is a natural fit for me. My first job was in the acute care setting at a Sun Health hospital that specialized in geriatric care. This social work position afforded the opportunity to interact daily with geriatric patients and the acute care setting afforded me the opportunity to envision changes that could have a dramatic impact toward a different outcome for our patients.”

Later, she earned her second master’s degree in Health Services Administration. This led to new opportunities to venture into post-acute care as the Administrator at the hospital’s rehab facility. Her social work background gave her the empathy, compassion, and drive to help older adults. Her administrative background provided the skill set to navigate the constantly evolving regulatory requirements.

Like Jon, Bhakti has always worked from her heart, but her work has rightfully earned plenty of accolades. Her community won the Environmental Design Award for their memory support suites at the 2015 LeadingAge Arizona Annual Conference. That same year she was presented with the LeadingAge Arizona Award of Honor. In 2016, she won the Best Practice Award from LeadingAge AZ and she was able to share these in her presentation on the topic: “Be the Difference by Building Relationships in Memory Support.” She also was recently selected as a Leading Age academy fellow.

For both of these unique individuals, the awards and recognition speak for themselves. Their communities are different in look and feel while delivering exemplary care. What I have observed from both of them, having had the privilege to tour their communities last year, was their devotion to their staff. That’s where they seemed to put their energy. And the feeling of reciprocation from the staff was just as tangible. Staff members would sneak positive comments to me when their “bosses” weren’t looking – an obvious mix of respect and admiration. That back and forth relationship can’t be fabricated, it’s either there or it isn’t.

How did they get there? Jon talks about setting the example. “I am capable of doing every position we have at Fellowship Square-Mesa,” he says. “I wear many hats and fill in when others are not available. I believe my crew see that every job is important and without that function being done with excellence the residents aging experience suffers.” He adds, “I let the supervisors hire and when necessary terminate staff. Some might think such power invested in supervisors would result in chaos but we have a 14% turnover rate which in this sector is outstanding.”

Bhakti lays out several bullets: Rather than paraphrasing I’ll just lay them out as they are, they speak for themselves. In her words:

• First and foremost, a good leader must lead by example; otherwise, their words are empty.
• An effective leader is a good teacher, who appreciates how critical it is to build up their team and equip them to face the unique challenges in our industry.
• Good leaders have a passion for what they do, are committed to the cause and have the vision to identify the path, find innovative solutions to difficult problems and willing to work hard to raise the bar to the next level.
• My goal is to have the right person in each position and to give them the tools and resources they need so as to maximize the strengths of each one.
• Good leaders know they do not accomplish these things alone, take time to acknowledge the effort each one contributes in reaching the goal and the importance of celebrating accomplishments.

ere you have it. People from remarkably different backgrounds. Two people whose legacies are crafting a whole new set of leaders and practices. They are so different, yet so similar. Passionate yet humble, demanding yet understanding, totally focused on simply providing the best care possible for elders from all walks of life. Their energy goes into their staff. Bhakti may get to her insights through her practice of yoga, and Jon through his study of nanotechnology, but however they reach their inner strength the state of Arizona, and the state of elderhood, is better off from it. Viva, Arizona!