LeadingAge, Halloween and a Latrine! 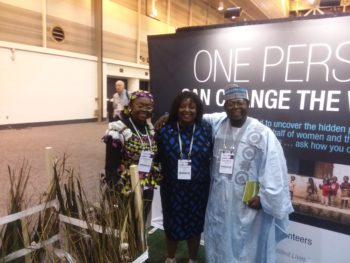 The culmination of the Francis tour was the LeadingAge Annual Meeting in New Orleans. Much to our surprise and delight, Katie Sloan and Sharon Sullivan provided Francis and CDVTA a booth free of charge, strategically positioned next to iN2L. Taking full advantage of this unexpected opportunity to enlighten conference goers on the latrine project and its mission necessitated quick thinking and swift action. So, while Francis worked on Cameroonian business, Rosie and I went off to Hobby Lobby and Lowe’s. The epitome of American capitalism, these mammoth retailers offered mammoth options. What began as deceptively simple purchases of faux greenery and wood scraps soon emerged as a model “latrine!”

Surely the most unique display in the exhibit hall was our make-shift “latrine,” shrouded by a 10’x12’ backdrop, carefully crafted by Lori Snow, highlighting Francis and CDVTA. It was cool to watch this humble man come face-to-face with 19 years of his heartfelt work. The modest cloth may as well have been a priceless piece of art as Francis was truly blown away and visibly moved by this statement. His life’s work was starring him in the eye. Wow!

Our three days of booth duty were a delight. The iN2L set up showcased our traditional products that keep getting better, while highlighting our commitment to continued innovation, as evidenced by our new FOCUS system. This juxtaposition of technology with a Cameroonian latrine was striking, certainly not what Tom, Leslie and I had envisioned when we started the company!

As is usually the case with the annual Leading Age conference, it was truly a mixture of work and play as we blurred the line we love to live and being with customers who are also good friends. One such occasion included dinner with Francis and an eclectic troupe of customers and iN2L folks. It was a lively and raucous evening – having Francis around is a lot like having a puppy at a park, everyone clambers to bend his ear and hear his stories. Of course, Francis is always more than willing to oblige! His talent for working the crowd was again evidenced during the reception we hosted in honor of Francis and Rosie Monday night. The event was brimming wall-to-wall with folks from all corners of the country and Francis didn’t disappoint! The perfect venue for our Cameroonian guests gave us the opportunity to celebrate the birthday of my indispensable right-hand, Dale. Riding the wave of adrenaline, we followed the reception with the LeadingAge LGBT inclusion event. This event is always a wild time, this year was no exception. We danced into the wee hours with Eversound’s “silent disco” adding to the ambiance.

The dawn of another day on the trade show floor concluded with a Halloween celebration that evening. The home of jazz and voodoo provided the perfect backdrop for the occasion. Ginger (she knows how to throw a party!) invited us to a formal McKnight shindig. Then we were off Bourbon street to experience a piece of authentic New Orleans. In the spirit of fully embracing the evening, a few of us donned our Cameroonian gear and enthusiastically chanted in Francis’ honor. It was either an exhilarating or terrifying spectacle, depending on who you ask! The Zeigler party was a perfect way to end the evening.

Over the course of our friendship one of the joys I’ve discovered with Francis is his appreciation of small, seemingly insignificant things, those everyday experiences the rest of us take for granted. This fact hit home hard the last day of the conference. Francis and Rosie, looking like Halloween trick-or-treaters, wandered about the vendors, collecting various knick-knacks that most would greedily snatch up only to later mindlessly toss into a closet or desk

. With Francis and Rosie, it was quite the opposite. To them, these innocuous marketing giveaways were precious golden nuggets. They were particularly enamored with pens, as in Cameroon, these items signify stature. It is at this point that my writing comes full-circle back to that initial shout out to Katie Sloan of LeadingAge. Katie, when I told her of their enchantment toward the pens, had the awesome idea of asking all the vendors to give their left-over pens to Francis and Rosie at the conference conclusion the next day. Tom Bang made the announcement and now, thanks to her light-bulb moment, large shipments of pens and other conference treasures that would normally end up as trash, are now floating across the ocean to Cameroon. The lesson of taking things for granted hit home once again.

The conference up and we were off to New York…