Meet the smartest guy in the room 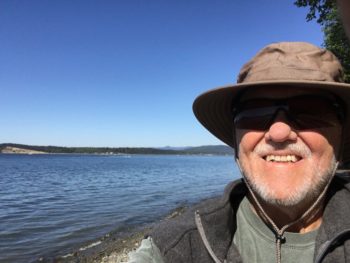 We’ve all grown up with a working class knowledge of the “legends” of technology, the Bill G

ates, Steve Jobs, Mark Zuckerburg, etc. High profile people doing high profile things. But the seeds of these legends were planted by people you’ve probably never heard of like Robert Noyce, inventor of the transistor, or Marc Andreesen, developer of the first browser.

This post is a tribute to another person behind the scenes, someone who has blended the field of aging with the field of technology. But over the past several decades, without any fanfare, this man has shaped the standards and vision of technology and aging, particularly long term care, in ways that will benefit the industry for decades to come. Join me as we raise a verbal toast to Mr. John Derr.

I’ve known John for over a decade, not as a close friend, just as a casually friendly acquaintance. My respect for him has always been immense. I first met him when Golden Living had him come to our office to evaluate iN2L. We were a fledging startup working out of a residential duplex with maybe 3 or 4 employees. He treated me and our team with a tremendous amount of respect that I will never forget. Our technology holes were blatant at that time but he appreciated our passion and the fact we jumped off the cliff to start something. Not once sense of patronization at our inexperience and lack of resources
As the years we

nt by I would see him from afar at various conferences and committee meetings. He was always engaged, always animated, always trying to move the needle as far as how organizations implemented (or didn’t) technology. He was never content, perennially frustrated at the pace of change, but always ending conversations with a smile. Through snippet conversations here and there I was learning that this was a fascinating man, so I set out to find more and more details of a well lived life.

John’s professional life was profoundly impacted by his time in the Navy. After he graduated from the Purdue School of Pharmacy (Distinguished Alumnus 2006) he enlisted to go to OCS during the height of Vietnam, when companies would not hire people who were eligible for the draft. So, he aggressively coerced his way into a naval leadership role, a career that wound up encompassing 30 years. He served on naval destroyers, worked with guided missiles, multiple nuclear powered ships, a fascinating journey through decades of military evolution and awarded the Meritorious Service Medal. As John put it, “In my 1988 retirement speech I concluded that my Navy career started with the building of the Berlin Wall and ended with the Wall being torn down.”

John’s Navy career provided his first exposure into technology and ignited his passion for it. The destroyers he lived on had to identify enemy aircraft, other ships and submarines all designed to attack his carrier. He learned and helped develop the technology that would track these threats and electronically warn all necessary personnel. He volunteered to go to Vietnam, but (to his wife’s delight) the Navy refused his request – saying he was more important as the Reserve Commanding Officer of a Destroyer than going to Vietnam. Through that experience the bug for technology was planted. The road he was most likely headed down (following in the footsteps of his father as a pharmacist) was about to take a different turn.

He made a couple of stops along the way before moving into the aging space. His upbringing and working for his father’s pharmacy gave him an inkling into healthcare. (His father’s pharmacy was called “Derr’s Dependable Drugs” – totally out of The Ozzie and Harriet show!) in 1998 he worked for a startup healthcare company, Shared Healthcare Services. They were designing a person-centric enterprise software application for SNF’s and ALF’s. Through that career, John became involved with the Health Information Management System So

ciety (HIMSS). He was the VP of Product Development at SHS, and found out that HIMSS did not represent the IT vendors of LTPAC. In 1998 he worked with the National Association for the Support of LTC (NASL) to form their IT Committee so the LTPAC IT vendors would have a forum. The list from there grows longer and longer, he was involved in the following types of projects, working for multiple companies along the way. He was:

I could literally add about 40 more bullets to this but hopefully you get the point, Mr. Derr has game!

e after reading this that all work and no play makes John a dull buy, but au contraire. His energy has no limits. He eloquently talks about his wife and two daughters, an endless source of support and stability through his dynamic career. And how about… the barbershop quartet? Who saw that one coming! He flunked Spanish in high school and got thrown into choir to make up for lost credit. That serendipitous failure led to a stellar musical career. He was accepted into the Purdue Men’s Glee Club, he sat in as the first tenor. At that time the Purdue Glee Club was in great demand – they made more money for the university from their performances than the college football team did! It may sound a bit old fashioned now, but back then it was cooler than Justin Bieber and the girls loved it! The Glee Club and his group were on The Ed Sullivan Show, The Bob Hope Christmas Show, President Eisenhower’s inauguration parade. He also sang with a group at Carnegie Hall. Cool stuff! John says singing was his “tranquilizer” when times were tough.

Johns work has subtly transformed the entire field of long term care. He puts in tireless volunteer hours, and he serves on committee after committee – all devoted to fighting for resident’s rights, for keeping reimbursement rates fair, battling onerous tort laws, trying to break down the barriers between policy makers, providers and residents. I asked him, of all the things he’s accomplished, what was he the most proud of. His answers summarizes the man.

“I’d like to think that I’ve made a difference in healthcare; served my country; raised a wonderful family; served as a mentor to others; and maybe a little bit crazy but, that I wrote and had published a 640-page fictional novel on international pharmaceutical espionage.” That says it all.

So, as you read this, hopefully you have the same perspective I do, that we have the honor of being in the presence of a true Renaissance man. Through talking to John, and emailing back and forth, it’s been difficult to limit the content enough to have McKnight’s approve this piece. It could be a book! The stories John tells of riding a bicycle to deliver drugs for his fathers’ pharmacy, elevating himself through the Navy, becoming an evangelist for person-centered health care before anyone even knew what that term meant, cranking out tunes in his barbershop quartette – these are all the fiber of John Derr. I don’t know about you, but the next time I see John I’m not sure whether to salute, applaud or bow. I think I’ll just settle on buying him a beer. John, thank you for your service to this country and to this profession. We’re all humbled by your passion and look forward to your relentless energy inspiring us for years to come.