On to the Big Easy! 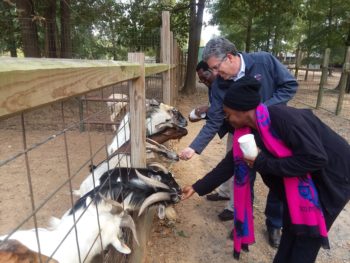 After our successful junket to the Midwest, it was time to head to Colorado and let Francis mingle with the iN2L folks. Our makeshift band enthusiastically welcomed him with a stirring, and certainly memorable, rendition of Neil Diamond’s “Coming to America,” the perfect prelude to the unveiling of the amazing “Cameroom,” designed by Kristin and Dale.

While at the home office, Francis treated our team to an impassioned presentation outlining his work, revealing the remarkable similarities between the paths and consequent missions of iN2L and CDVTA. Both organizations were founded following the death of a parent (my Mom/Francis’s father), both organizations spent a long time finding their way, financially as well as organizationally, and both are fundamentally driven to make underserved people’s lives profoundly better. It’s been a delight to witness so many on our team embrace these similarities and consequently jump into the fray along with Francis: Laura Mock started her “shampoo campaign,” Kristin, with Meaghan’s help, created a dedicated website, Dale kept the numbers straight, while Juliet kept the projects organized and Heather scheduled Francis to meet with her “Women in Design” colleagues. It doesn’t stop there, at least five members from our team are seriously thinking about heading to Cameroon next April. All along the way, Rosie is discovering that on the other side of the planet, her husband’s insanity is equally matched by mine! It’s been an honor to be along for the ride!

Embracing this adrenaline rush, we chose to bypass the monotony of flight and instead hopped into the Tahoe and drove straight from Colorado to New Orleans for the LeadingAge Annual Meeting. For such an arduous undertaking we confidently turned to the iN2L man behind the curtain, Mr. Michael Gardner. Half man/half robot he easily dives into these marathon drives by going into his “zone” while everyone else comfortably nodded off, listened to music or nibbled on a road warrior staple – Twinkies. I took on roughly three hours of the nearly 26-hour drive, the rest is all on the G-man. Rosie and Francis characteristically started snoring before we hit the first on-ramp.

Never prone to bypassing a bit of classic Americana, we opted to make one fortuitous stop along the way – an exotic animal park in the middle of nowhere Louisiana. It is home to some rather bizarre animals and, of course, a go-cart track! After feeding the creatures, we couldn’t resist testing our mettle on the track, ultimately surviving yet another novel experience with our friends from Cameroon.

When the drive was finally behind us around 6:00 pm Saturday evening, we pulled into the Big Easy. A mere 18 months since our initial meeting here our lives have been inextricably connected since.