The Big Apple, the Big Man and Blue Men 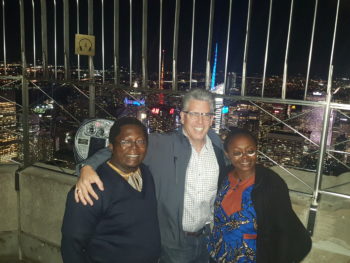 We were off to NYC! If we can make it there …

Weekends on this journey were open ended adventures – randomly thrown together and filled with non-stop entertainment, yet consistently result in amazing moments of hilarity and patriotism! As the host, chauffeur, tour guide and cultural consultant all wrapped into one, I would have been remiss if I didn’t take full advantage of these bookends to our weekday adventures. What better place to start than a trip to New York City, the Big Apple? This blatantly spontaneous jaunt resulted in a weekend that presented us with all kinds of novel experiences and tapped into all kinds of emotions.

Our random combination of Francis, Rosie, Karen Stobbe and her daughter Grace, was an eclectic group to say the least. Grace, a New York City newbie, is in the process of wrapping up her high school career. Francis and Rosie only enjoyed a brief taste of the Big Apple earlier in our tour. Karen was justifiably worried about what exploits I would inadvertently get them all into! What’s a faithful tour guide to do? How about heading to the infamous site a lovestruck mega-gorilla ascended back in the day – the Empire State building would be the first stop one on our journey.

Driving into NYC from New Jersey was an adventure. Grace is a strong rule follower, so it was a bit rattling for her when my first driving maneuver was heading the wrong way down a one-way street, shaving 15 minutes off our travel time. Driving in the city was very liberating for me. Rules were minor annoyances deserving only a passing glance, certainly not set in stone. Therefore it was an apt metaphor for how I roll. The drive into the city was full of arbitrary honking, running traffic lights, gunning through bike lanes, and overall indiscriminate bedlam. My once

random group has now coalesced: Grace was wild eyed and terrified. Karen focused on numbing her senses and kept her eyes tightly closed. Francis and Rosie blindly trusted what I was doing. All they knew was there were no Cameroonian potholes to bounce through and navigate around.

We got to the Empire State building right as darkness was taking over the stage. I felt waves of both nostalgia for years gone by mixed with patriotism as I craned my neck and scanned the sheer enormity of such a marvelous structure. Lots of other folks had the same brilliant idea this Friday night, so it was justifiably crowded, but the company of my friends from Cameroon, with their wide-eyed sense of wonder at this monumental edifice, more than compensated for any jostling. We rounded the deck from a spectacular 104 stories up, got our selfies in and played tourist flawlessly as we peered over the railings and surveyed the city in its likeness to old Dick Tracy cartoons. We attempted to track the wild maze of cars racing through the myriad of intersections below. Francis and Rosie looked like kids opening their presents on Christmas morning. (Random trivia note – can you believe this building was constructed in a mere 14 months back in the early 1930’s? Yozza!)

We scurried out the building to get to our next stop – a live New York performance. A more traditional guide would have set up a Broadway play, but I headed down the Blue Man Group path. When in doubt, I err on the side of bizarre and this form of entertainment fit that bill. We were running a bit late trying to get across town. Since we couldn’t all fit in to one taxi we had to break up to get there. The “conventional” folks (Grace, Karen and Francis) took one taxi, while the “renegades” (Rosie and I) hopped onto the back of a pedicab and held on as a crazed native New Yorker pedantically pedaled through the sights, sounds and smells of Manhattan. We all arrived on time and the show delivered as promised – total mayhem! The three Blue Men are known for pounding on their drums and performing random acts of insanity, all heavily laden with humor and adolescent shenanigans. OK, it wasn’t Hamilton, but, as gobs of paint and toilet paper filled the air, I smugly smiled imagining Rosie trying to tell her friends in Cameroon what they had witnessed on stage.

As any tour guide worth his salt knows, it was now time for a late-night subway ride! The locals guided us to the appropriate ride to Times Square. This experience further fueled the wild-eyed looks from Rosie and Francis. It was also fun to experience Grace’s reaction, as she vacillated from being overwhelmed at the vastness of t

he city to thinking it would be a cool place to hang for some time. We stepped off the subway right in the heart of Times Square – the raw intensity of that experience is overwhelming no matter how many times you see it. We stood mesmerized, our heads spinning at the barrage of noise, lights and sounds of pure American commercialism advising which Broadway shows to attend, athletic apparel to wear, fragrances to absorb, tech toys to buy, overpriced designer duds to consume. We escaped this intensity by sneaking into a restaurant for a subdued Italian dinner. It was truly an island of tranquility in the middle of Gotham City. We recreated the night over cabernet and lasagna and no one noticed it was moving in on 1:00 am. We were in the “city that never sleeps!”

With full bellies and happy hearts, we drove under the Hudson and meandered back to our car. Karen and Grace had their own adventure grabbing a train back to New Jersey. What a crazy, eventful day and night! Most people would opt to sleep in, but not us! We were in bed by 2:00 am and prepared for an early morning flight to Georgia. Cultural opposites were part of this journey and this weekend fit the bill.