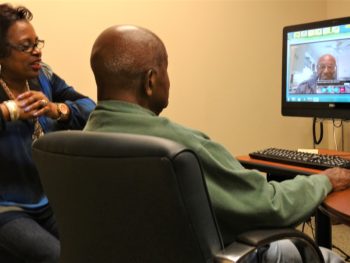 I had the honor of facilitating the connection between two World War II Veterans, Isaac Pope and Charles Johnson, in 2016. This was done via two It’s Never 2 Late systems; the Shuttle and a 23” Mobile Flex. Read the original blog post on the iN2L website.

Oakland which was where I was going the following week. Everything fell into place and I found myself a few blocks away from the residence of Charles Johnson. I was filled with anxiety trying to think of some brilliant things to say during my visit. I quickly called my stepfather, an Air Force Veteran, to arm myself with WWII knowledge so I could have some smart things to discuss. He gave me a piece of advice I’ll never forget. He said, “don’t talk – just listen.” That is what I did for 9o minutes after entering Charles’ home.

I later had the opportunity to be able to re-visit NC State Veterans Home where I met Isaac and his niece, Patricia. I listened, again. Isaac shared fascinating stories as I showed him pictures of the photos and memorabilia Charles shared with me.

The full story about Isaac is being told with a film called, Isaac Pope: The Spirit of an American Centu

Isaac is a WWII Vet, the grandson of slaves and son of sharecroppers, who fought in the Battle of the Bulge against the Nazis, then struggled to find his American Dream after the war. To learn more about this iconic film or to become a supporter click here. Or follow them on Facebook, Instagram and Twitter to learn more.

Fortunately, this is not the end of the story. It’s the beginning. The story is not about me or iN2L. It is about our veterans – regardless of their age, race or religion. Take time to listen to the stories and events that shape people’s lives to be able to truly understand who they are and make a connection.