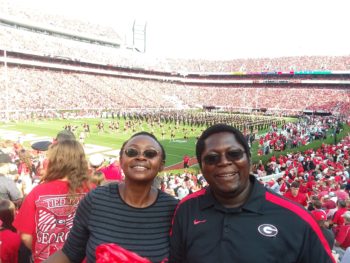 To know our country is to know football, especially college football. To know college football is to know the SEC. So that was our next stop, an SEC football game. We dashed to the Newark airport with pieces of Times Square lint still sticking to our clothes. As the day kicked off, we caught a non-stop flight from Newark to Atlanta, and, as was usually the case, Francis and Rosie had no idea what’s in store!

We landed in Atlanta and headed straight for Athens. On the way to the game we picked up Robert Bowles, a “new” friend of mine. Robert, the palpable manifestation of courage in the face of adversity of any kind, is living with dementia. He understandably took the diagnosis hard, but, after being knocked down, he bravely got right back up and wears his diagnosis on his sleeve like a badge of honor, challenging anyone to make him feel sorry for himself. (I am grateful to Karen Love from the Dementia Action Alliance for making the intro at a conference six months ago). A proud UGA alum, he was fired up about the festivities of the day and more than happy to be along for the ride. We assembled the perfect entourage for the game. My eyes were on the road, but my ears were on the conversations between Robert and Francis. It was electric – two legends comparing notes while I worked my way up the highway. I was listening to greatness.

We arrived in Athens about 90 minutes before game time, kudos to our new sales guy, Nathan Jones, for lining up the day. Nate is a passionate promoter of iN2L, and with a background in technology and aging, he is a genuine asset to our team. He is also a former graduate assistant football coach at Georgia, so we scored bonus points – being able to travel with an insider!

Georgia had recently been designated #1 in the college football rankings, making the day intoxicating and the air heavy with anticipation. As we navigated our way through tailgate parties, campus security and eventually to our seats, I once again savored the sensation of watching Francis and Rosie. In this case, I took in the spectacle of college football through the eyes of people from another land where an equally celebrated sporting event is a bit more pared down from our norm, with 250 people gathered around a soccer field comprised of dirt. The whole experience for Rosie and Francis was one of wonder and awe, all through the filter of Georgia red!

Nathan taught them the appropriate cheers before the game and as we sang the national anthem a massive military helicopter hovered above the hungry crowd. The game went as expected, yielding a solid Georgia win. After attempting to explain the rules of the game, I eventually conceded, but Francis seemed to get it and afterwards professed his love of the sport, claiming that it was more exciting than the “football” he watches back home. I remain a bit skeptical of that, but am convinced he is now a lifelong Georgia fan as he has already been practicing his dog bark since he got home!

After the game Nathan was able to sneak us into the massive Georgia athletic complex – what a thrilling experience! I’m a huge college football fan, so I felt like a kid at Disneyland as we wandered through state-of-the-art weight rooms, meeting rooms and a full-sized indoor football practice field. Zach from iN2L captured the whole adventure on film. While outwardly we appeared confident in our sense of belonging, inwardly we remained tempered by the realization that, at any moment, we could be unceremoniously kicked out. Francis and Rosie

soaked it all in, chatted with student athletes and tried to imagine how they would possibly explain this facility to the folks back home. They even hobnobbed with one of the nation’s top recruits! It was truly a jaw-dropping tour on many levels. Thanks again to Nathan for setting this up. (FYI, Francis has a lot of cosmic connections, so as you ponder who to root for in the college football playoffs, I would strongly suggest Georgia!) Our very long, but very satisfying day finally crossed into the end zone – the nonstop banter between Robert and Francis on the way to the game was replaced by sleepy American and African snores on the way back.

The next morning we were off to a homemade brunch hosted by one of the most passionate women in the world, Rose Marie Fagan, a professor emeritus of the culture change movement and a soul mate of mine. Having taught me

the power of person-centeredness, she’s been half sister, half mentor to me. She had been enjoying reading about the travels of Francis from afar, so we made a detour to her house, a worthwhile excursion. She has also had to handle personal adversity, has stared it down and ultimately emerged stronger for it. Characteristically, she very generously treated us all to a spectacular meal that included assorted cool folks around the table – Rose’s son, various friends and the infamous Kim McCrae. Francis and Rosie enjoyed yet another American feast with extra helpings of fun and frolic!

From there we made a mad dash to Walter Coffey’s annual LeadingAge Georgia Profiles of Positive Aging Image Awards, an incredible conference honoring people in Georgia who have changed the perspective of aging. Walter honored Francis as well, taking advantage of this opportunity to add a little international pizazz to his event. Throughout this whole journey Francis and Rosie are like Superman and Superwoman, donning their “costumes” in a nanosecond. No need for a phone booth, just a simple bathroom. For this event they were decked out in appropriate Cameroonian attire, garnering a double take or two as they hung out behind his poster.

The weekend finally came to an end. From the Empire State Building to the University of Georgia, some fun, frolic and dignified acknowledgement along the way. The newest Bulldog fans, Francis and Rosie, took on the US for another weekend, making it their own once again. But we had no time for dawdling around, it was time to head back west!

Get to Know Our Chief Customer Officer, Paula Sobb