On to the Show Me State 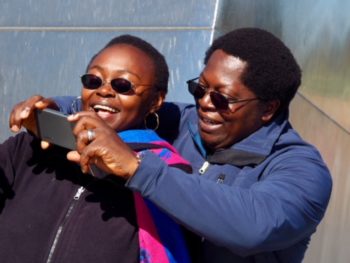 Missouri continued the thread of Midwest hospitality as it opened up its arms to the Cameroonians! This was a whimsical late minute addition to the tour. I delivered a keynote presentation about Francis at their annual conference a month ago and Chris Crouch, the feisty and charming VP from Bethesda, stood up publicly and proclaimed that Missouri wanted to sponsor a latrine! Bill Bates, also feisty and charming, rolled his eyes in response, but realized he couldn’t argue with his board chair! So here we were, at a Bethesda community, talking about goats, Cameroon and the power of positive works. It was a fun presentation for a very receptive group Chris and Bill had assembled, which in turn yielded several donations on the spot! I was happy to see old friends as well as new friends in attendance. (Cheryl, you know I’ll be hitting you up for some latrine money!)

Bill and Chris continued their generosity by setting up a tour of St. Louis highlights. This was quite a treat for Francis, Rosie and I to experience the local flavor from real citizens. We dined at

Salt + Smoke in St. Louis’ fashionable Central West End, checked out the iconic Arch and topped off the experience with a popular treat – frozen custard from Ted Drewes. Bill, inherently influenced by his Kansas City background, attempted to dismiss St Louis barbecue as inferior fare to that of his home, until he begrudgingly admitted it was pretty good!

The Cameroonians remained awestruck at structures like the Arch, staring silently towards the zenith, absorbing it all while marveling at the strength of a country that sustains such remarkable infrastructure.

We were chauffeured about to our various excursions in the Bethesda resident bus and truly felt like giddy school kids on a high school trip, complete with all the bad jokes, childish laughter and story after story. It was fascinating sitting in on a conversation with Bill explaining to Francis some of the nuts and bolts of senior living and reimbursement. Bill remains stalwart in fighting the good fight, pushing against cuts being thrown upon his members by the Missouri legislature. As Francis listened to the conversation, I could feel his head churning at the thought of what any type of reimbursement would be like in Cameroon – two vastly different perspectives.

As our tour rolled to its end, we scrambled to meet Kimberly Brown, a passionate Education Director, at a Spectrum Retirement community. Kimberly is passionate about Cameroon, about Francis and about life. We’re trying to get her to hop on the April 2018 bus, there is room!

Thanks Missouri, and especially Chris, for throwing this amazing trip together at the last minute! The Show Me State truly delivered in spades!