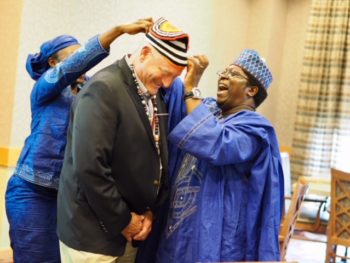 Travelling across the country compliments of Southwest Airlines, we went from DC to Des Moines. Differing cultures of our country came to the forefront the minute we got off the plane. It’s all part of the magic of the US. Francis and Rosie were like wide eyed kids at Disneyland, wandering through the changes and trying to absorb them through their own unique lens of Cameroon. Instead of Tomorrow Land to Fantasy Land it was East Coast Land to Midwest Land. We got into the hotel late, then were out early the next morning for a two hour ride to Western Home. The one and only Laura Hanzel from iN2L was along for the ride, her photography prowess came into play for the next 48 hours.

As always, it was a fun ride. Francis is usually energetic and talkative in the morning, but he always succumbed to the knockout punch of the soft gentle gliding of our SUV across the smooth highways. We make a morning stop at McDonalds – their first stop at the Golden Arches. I wanted them to see all of our culture. We knew we were in Iowa as the friendly assistant manager recommended sausage and gravy and biscuits for Francis’ meal. I nixed the idea as Francis and Rosie were decked out in Cameroonian garb – gravy and fine cotton garments are a combustible mix. So an Egg McMuffin it was.

Cameroon is such an agricultural economy, but the farm work is done in extreme mountainous conditions and often times by hand. So it was pretty amazing for Francis and Rosie to see enormous combines grazing back and forth across the farm flatlands. It was like comparing a printing press in full production to cursive writing by hand. The plains were flat, the equipment huge, the strange reality from being at the White House one day and Cedar Falls the next was overwhelming.

We arrived at Western Home and the generosity they have shown to iN2L, Francis and CDVTA was remarkable. Francis and I presented our story to a full house of Western Home staff, a handful of elders, and residents of other

communities and, to our delight, Shannon Strickler, executive director of LeadingAge Iowa. Francis payed respect to the “tribal chief” of Western Home, the one and only Kris Hansen. Kris gave thanks left and right to his staff that had done the work from their foundation. They were the pass-through funding vehicle for CDVTA that, without charging a dime, seamlessly made sure funds received from donors for the projects was transferred to Cameroon. Francis swelled with gratitude. Sonya and Our Man Josh took Francis and Rosie on a tour of Western Home and their services. They were blown away at the services and amenities provided, especially for folks dealing

After our presentation we met Pat Beck, an energetic woman who works part time at Western, and part time at her own small farm. She generously invited us to her farm on the way out of town. We accepted and when we visited saw large goats and a whole bee keeping operation. It was such a local farming experience in the middle of many massive farms, Francis and Rosie even took a tour of a farmhouse and barn. Local hospitality indeed! It was a surprise to me, but certainly not to Oneill and the other CDVTA staff, that Francis is terrified of bees. Rosie immersed herself into the bee keeping gear and got right up to the hive. Francis pretended to be engaged but he was ready to head to the hills if a bee got through the gear.

From there we had a long drive to St Louis. Once again, the heavy eyelids of our Cameroonian guests took over. They slept virtually the entire six-hour drive. Red bull, mixed nuts and E street radio kept us moving, gentle snores were the constant thematic backdrop, like rain bumping off of the windshield. We pulled into St Louis around 11:00 pm. Francis found it extraordinary how short the distance was between the cities. I started to explain that was primarily due to the fact he slept the whole way, but I was too tired to make the argument. The Red Roof Inn was our host for the night!