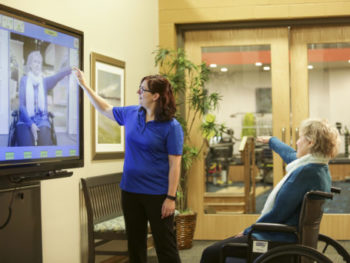 Recently, Ellary Allis, blog writer for SevenPonds, spoke with Juliet Kerlin, research director at iN2L about how access to technology can engage and empower seniors. Below is part one of the interview.

Ellary: What is It’s Never 2 Late and what does the company do?

iN2L was founded in 1999 by a gentleman named Jack York, who was an executive in Silicon Valley interested in the concept of computer technology for older adults. Jack started out by donating computers to assisted living communities and nursing homes in Southern California, but discovered that conventional technology was too difficult for many of the residents. He believed that using computer technology could bring a lot of access to the outside world for these individuals, and could be of therapeutic benefit for seniors with cognitive decline or physical limitations if it was customized in a way they could engage with. The advent of touchscreen technology has really made that possible.

One story I love that really illustrates what iN2L does is a story of Jack’s. Jack met a woman some years ago in hospice who loved to play bingo, but she was already bed-bound and couldn’t leave her room. The facility she lived in installed an iN2L system in her room that included a Skype-like program the company had developed. They put the system in her room, and then they put another system in the activities room so that she could play bingo with everyone in the community. I always thought that’s exactly what kept the company going through the years when others couldn’t understand the benefit of our person-centered technology. It really opens up the world for individuals, gives them access to experiences they couldn’t have otherwise.

Ellary: What does it mean for a computer to be senior friendly?

Juliet Kerlin: It really needs to be a little bit intuitive and it needs to be easy to use. That’s what I think makes the difference between successful technology and technology that is not successful. In the case of engagement technology, it has to provide access to totally personalized experiences. One size does not fit all.

We also make sure that we have continuity with our content even as it evolves and expands. We make sure that people can find content that is familiar. It’s a balancing act though, because we also want to provide new content for the seniors who might want new applications and new games, and also for the staff. We want to keep them interested and engaged with new videos and applications.

Ellary: Can you talk about the rehab applications of the It’s Never 2 Late program? Explain some of the therapy-specific programming.

Juliet Kerlin: Chris Krause, our director of rehab, is charged with making sure that our content can be used specifically for rehab, whether it’s occupational therapy, physical therapy or speech. He uses content that is already part of the system and categorizes it so we can set goals using specific modalities, whether it’s strength training, mobility, endurance or something else. He’s also created specific programs that can be used by therapists to help engage people. One of the things we’ve discovered is that to keep somebody really engaged in their therapy, it’s important to provide things that they enjoy.

Ellary: Can you give an example?

Juliet Kerlin: Yes. During my presentations to assisted living facilities and nursing homes, I show a before-and-after video of a lady named Dorothy. It’s such a quintessential experience, and the audience usually gets a kick out of it. During the first video, the therapist is trying to motivate Dorothy to do an exercise that she really doesn’t want to do. She uses a walker, so she needs to stand in order to regain muscle strength in her legs. And Dorothy doesn’t want to have anything to do with it. The therapist is trying to convince Dorothy to get up, and she says “Dorothy you have to do your exercises.” Dorothy pretends she doesn’t hear her.

Then the therapist says, “Dorothy what are we going to tell the doctor then?” And Dorothy says, “I don’t care what the doctor says.” Dorothy is very feisty! When I show the video, the audience always laughs because they’ve seen that — they’ve experienced a resident that doesn’t want to do one of the things that might be very beneficial for them.

Then in the second video, I show how Dorothy was introduced to the iN2L system, using Google Earth. All they did was put Google Earth on the screen and tell Dorothy she could use it to visit her childhood home. The system is on a mobile cart, which they set up so she would need to stand to see the screen. It was amazing to see her standing, giggling, loving how the screen was moving. She stood there during her entire session, and she never even noticed that she was actually standing there and doing range of motion too.

Juliet: Isn’t it? That’s what our technology tries to do — motivate people with things that they love to do. That’s one of the biggest difficulties for a lot of therapists — engaging their patients for longer periods of time. They get bored; they get tired, and therapy is not something that appeals to them on a personal level. So to be able to show them something or engage them in something that really captures their imagination or allows them to continue doing something they really love is a wonderful tool and motivator.

Ellary: Why is it so important for seniors to have access to personalized technology?

Juliet: I’ll give you an example. In another video, a therapist is trying to engage a woman named Joni but not having much success. The therapist found out through her family that Joni had been a dancer. So she used one of our music applications, and soon Joni was dancing on her walker and moving because she was listening to music. So again, the idea is to appeal to the individual…music might not have appealed to Dorothy, but it does appeal to Joni, and vice versa. It’s about finding what motivates each person.

Technology is a tool, but you really need people who embrace it and use it to it’s maximum potential. And that’s what’s happening now. A lot of therapists and caregivers really see the potential, and also realize that in order to use the tools effectively, they really have to know the person who’s going to be using them. So the therapists, the staff and the caregivers talk to the family of the residents and talk to the residents themselves, and really try to learn what motivates and engages them. Then they can use iN2L to build on that engagement. It helps motivate people to stay connected to their communities of proximity as well as their communities of affinity. And I think that’s why the technology is so great. It allows access to people, places and things that may be far away, that may not be accessible to people who may be living in senior living facilities. 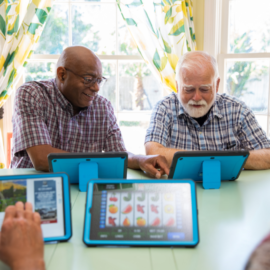 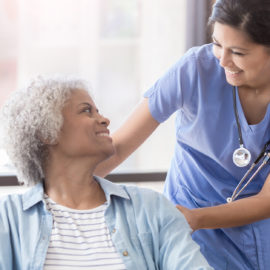 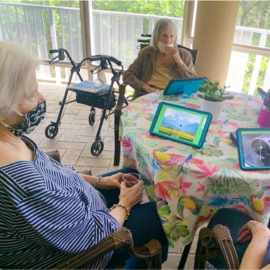 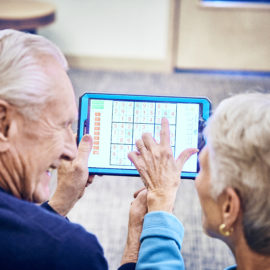