The Magical Village of Oku 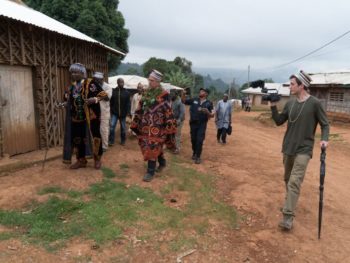 Another day, another adventure. We climbed high up i

nto the mountains where a magical village called Oku awaited our arrival. As we climbed higher and higher into the mountains, the stunning topography of this country screamed cheers of welcome. It wasn’t a straight climb up into the mountains – we went up 1000 feet and then down 500 feet, then up another 1000 feet. At the base of each drop were dozens of homes where the local villagers lived. Built with adobe-type brick and usually with white tin roofs, the structures glistened like stars all over the countryside as we bounced up the roads. The scenery was breathtaking from its depth, but also culturally fascinating from village to village. Goats were prevalent everywhere, usually tied on five-foot long ropes. They were scared at the traffic as the cars, trucks and motorcycles whizzed by. This link says it all as to the splendor of the countryside – great work by Zack.

Activity was constant on the roads. We saw women (never men) over and over carrying bags of rice, fruit and other goods on their heads. Roadside after roadside had fresh produce shacks. We stopped occasionally and Lilbert hopped out of the car to buy savory bananas and other local foodstuffs. (Everything was a negotiation in this country – even buying bananas was like Shark Tank!) We traveled always in a caravan, usually 3 or 4 motorcycles and one other car. The front car had its lights blinking to signify our procession and that caused the locals to stop their work and look at us as we whizzed by. The looks were of curiosity but when I smiled and waved at the villagers, particularly the children, most of the time they smiled and waved back. Cameroon is a friendly people and a friendly country.

We inevitably reached Oku. We

stopped to meet a government official and pay respect. The village of Oku was magnificent and as we get closer it appeared significantly larger than the previous villages we encountered. Oku was not part of the GOATT Project, but Francis is impressed by their work ethic and they wanted to see the strange Americans. The last couple of days had been so hectic with multiple visits but this day was more relaxing as we soaked up the experience without having to rush through any of the festivities.

I tried to prepare myself for the pomp and circumstances of these greetings but they just kept coming bigger and bigger. That was the case at Oku and Francis has choreographed all of this! Dozens of women greeted us as we reached the outskirts of the village, most of them swaying branches back and forth, I was engulfed into the experience. It was so strange to go from the surreal, magical, serene drive up the mountainside to being buried in a sea of Cameroonian women paying homage, chanting and dancing in unison. As they led us through several small courtyards I assumed I would be led into a central greeting area. But a detour was in front of us – it was time to meet another royal highness. This time it was His Royal Highness Fon Sintieh II Ngum Martin.

Thankfully both Francis and Lilbert provided me with the appropriate guidance through the formality of these visits. Francis made it clear not clap three times to acknowledge this ruler – that came later in the ceremony. I’m such a non-rule follower back in the states, but here, on the other side of the world, I found myself

playing close attention to the local customs and acting accordingly. After 15 minutes the ruler appeared and the look on the villagers faces told me how powerful this man is. In this village it was appropriate to bow in his presence. Once again, I was in the presence of power and greatness.

Again the traditional ruler was personable. We spoke respectfully to each other with Francis guiding the conversation. Suddenly I was taken into a back room – this time Zack was not allowed in. Once there, three elder men showed up out of nowhere, all holding bits of African garb. There was a different persona to this tribal leader. He was certainly older with his own set of traditions unique to his village.

When I came back in my new garb, the crowd cheered in ceremonious adoration. It was comical, but serious at the same time. For the second day in a row I had been given a village title and another red feather. It was impossible for the sensation of “how did I get here” to leave me through the whole journey. When the chief came out to announce my new title and another red feather was displayed, I was treated with another level of respect. I now outranked virtually all of the men. Wow! My title was Oku Is Nforme.

When I received the proclamation, the chief announced I didn’t need a walking stick because of my newly ordained special powers. Instead of giving the stick to me it was ceremoniously handed to Zack. He had to figure out how to navigate filming and being decorated at the same time. He was not going to let his stick go, even with a video camera in one hand and a still camera in the other. This was his stick! Throughout the whole trip the culture of politeness in this country was personified in how Zack was honored and respectfully treated. Usually when the village elders gave their proclamations to our entourage Zack was always mentioned. There was a good mojo to “Zack and Jack” – we heard it over and over and we both smile at each other wondering what my son, Zack’s friend, Nathan will think when we return.

After the ceremony we took a tour of the village grounds in Oku. We meandered through multiple rooms with the chief leading us from one darkened room to another. It was around 5:00 pm, so with no electr

icity in the rooms and daylight fading there was a surreal fading daylight that only added to the mystery and the spirituality. We walked through what he called a museum – it was the first village where I saw some capitalism in action as part of the museum sold local hand crafted icons. The first couple of rooms we went through were interesting, multiple African sculptures and statues depicting villagers, animals, various facets of this unique culture.

But as the tour continued, my senses started to stir more intently. Each room was darker and more foreboding than the previous one and the icons in each room also got larger and larger. The “public” museum gave way to the part of the museum that only certain people are privileged to view. It was another sensation impossible to convey in words, but I felt the Cameroonian spirit through the carvings and sculptures. They were almost life size, depicting the essence of African shapes and sizes. But when I was in these rooms, viewing pieces of art from about three or four feet away scattered in haphazard nooks and crannies, I was not looking at lifeless icons. There were spirits in these walls and carvings that were real. I could feel the essence and spirit deep in my lungs. The spirits of generations are alive and well, vibrant and present in these rooms. I was in the middle of sacred grounds. Wandering through the hand built caves and walls as the light of days faded into dusk, the gravity of the environment swallowed me whole. This was as spiritual of an experience as I have ever encountered.

As the tour wound do

wn, I pulled Francis aside and asked the chief to bless something for my brother Jim who has health issues. I wanted to harness some of the power of the chief, and of Oku, to bring back to him. The chief was honored to comply and he brought Francis and I back into a small, cramped room. To my delight, he is took this request seriously and no one else is allowed into the room. I don’t want to reveal the experience inside the room or the blessing, that somehow seems disrespectful to this powerful elder. But it’s something I won’t forget. The feeling from that room stayed with me. I brought some African pieces for Jim. And no one is allowed to touch what I’m bringing back. I guarded these items with my life over the next two weeks and I’m happy to report they were delivered safe and sound to Jim. He now knows and feels the power. No one else was privileged to touch this gift.

The day ended with another traditional meal – Zack and I ate well on this tour. Rice, chicken, plantains and okra, bring it on! The bottles of beer we enjoyed, local African fare, were very large. When we were done for the day, the drive back to Mambesa awaited us. We got back in our spaces and we headed down the hill to embrace the potholes. This time we also had Rosie squeezed into the front seat. I had a terrifying moment when I inadvertently left my wallet on the side of the road. I discovered that it was lost miles down the road. Sylvester whipped a u-turn and flew back to the exact space where the wallet had fallen onto the street. Wow! I want these guys with me back home along with my red feathers! Two weeks later I proudly embraced the Cameroonian dirt that is still on that wallet.

Before arriving at the hotel, Rosie delightfully informed Francis that the internet is back, after four months of being shut down by the government. The English speaking side of Cameroon is able to get back on-line. I was ecstatic, not because I could get the Internet (I enjoyed being cut off for a week), but because of my experiences the night before. His Royal Highness Gwan Mbanyamsig gave me the red feather and talked about the powers that came with it. I asked if getting the internet back on was possible with my new powers. We all laughed. But here we are, less than 24 hours later, and it was on. So Francis gave my royal status full credit! Rosie was happily typing away on her cell phone as my eyes faded to sleep. That was my last vision of the night before banging back into our hotel. Viva Cameroon!