Welcome to Cameroon – A Glorious Arrival 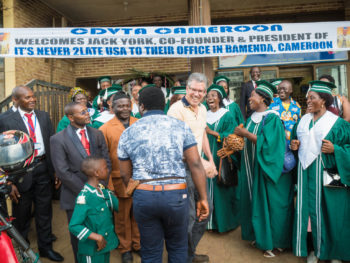 And so, my journey began: from Denver to Chicago; Chicago to Brussels; Brussels to Douala, Cameroon. A journey that 100 years ago would have been unfathomable can be casually embarked upon with a few dollars, a few vaccinations and monstrous planes that shrink the enormity of our planet. Zack and I had never been to Africa before and we anxiously wandered off the plane in Douala – wandering towards customs, feigning that we know what we’re doing. The massive smile of Francis caught our attention from 50 yards away. He had a colleague from the government whisk us through security, bypassing the dozens of other people still waiting in line. I meet my soulmate again with hugs and smiles. The second adventure of our journey was officially underway.

Our first moment of trepidation took place when we realized that both Zack and I have lost our luggage. Our destination was over nine hours away, so rather than wait a day or go back and forth, we decided that we would “shop” our way through the inconvenience and buy clothes. We headed out the door of the

terminal and a good looking police officer from Cameroon saluted me. I originally thought it was some strange form of local hospitality. Then Francis explained I have a bodyguard for the trip who would be with us throughout the journey. I had somewhat mixed emotions, as its comforting to have that force by my side, but also wondering exactly what he’s going to be on the lookout for! We climbed into a Toyota SUV and met Sylvester, our driver for the week, He had to fill the immense footsteps of Michael Gardner from iN2L who embraced that role for us in the US.

We made a quick stop at a local clothes “hut,” – hard to call it a shop as the inside of the establishment was about six feet by 14 feet with clothes hanging from all angles. We picked out a few things, guessing at sizes, and amusingly watched Francis barter back and forth with the four people who worked there. Once the transaction was completed, we were off for our first meal in Africa – a restaurant dubbed the “White House.” The food was great, different flavors and spices but nothing outlandish. Then we were then off to a local hotel in Dauola with a 4:00 am start for our drive the next day.

The next morning started early for our drive towards Francis hometown (and CDVTA headquarters) Bamenda, about a nine hour trip. Starting the journey in the darkness of night lent itself to a fascinating introduction to this new world. We arrived a

fter dark the night before so we had not seen the light of day yet. Having it come upon us incrementally somehow lent itself to a spiritual awakening to a spectacular part of the world. The roads were a bit rough as we bounced out of town. Through the darkness we saw old buildings and houses with motorcycles all over the roads – even before the crack of dawn. It was Easter Sunday and we saw groups made up primarily of women, extraordinarily dressed and chanting as they walked down the street.

Once we got out of town, the trappings of city life faded away into the lush forests of Africa. Morning dawn slowly crept into existence and fog drifted through the jungles. With mornings new light upon I felt like I was on the set of Jurassic Park. It was surreal. Francis provided fascinating commentary about the nature of the land we were driving through as well as political commentary including the differences between French Cameroon (the dominant majority) and English Cameroon (where Francis does his work).

We stopped for breakfast in Dschang and I had the pleasure of meeting Francis’ remarkable wife Rosaline for the first time. The city was not just a meeting place for all of us, Francis and some of his colleagues from CDVTA were able to work since the government recently shut off the internet in his city. Meanwhile, Zack and I wandered through outdoor markets in Dschang, a fascinating cultural experience.

Back in the car we had a two hour drive through the worst roads I have ever been on. The last few miles into English Cameroon from French Cameroon were especially difficult, and it was hard not to think this is somewhat intentional. Francis marveled at the smoothness of highways in the US – now I understand why. Francis said he wanted to show me the CDVTA offices and that experience opened my eyes to how outlandish the week was going to be.

We were on the main drag of Bamenda. As we got closer to his office there was a commotion in front of us. After a few seconds of processing I realized the commotion was all aimed at me. Francis lined up a talented choir of local singers dressed in black suits and red ties who were chanting songs of welcome to Jack and Zack. Zack was quick to pick up what was going on. He was out of the car with the camera whirring before I had processed what was going on. A large banner was hanging over the festivities with my face highlighted, wearing the African attire I had put on in the US. It was a welcome I would expect for a foreign dignitary or a celebrity, but certainly not for me. As the iN2L gang can tell you, I’m not one to be at a loss for words – but this one got me. It was overwhelming. The local songs of gratitude were so well done and everyone was singing at the top of their lungs, I was Jim Carrey in the middle of The Truman Show. Francis took me into the office and I got a room by room tour, but the singing never stopped. All of the donors for the senior center project had their names on plaques that would be displayed later. What can you say to a welcome like that? I am still numb as I write about it and I laugh as I look at Zack’s pictures of the event.

After the event end

ed, Zack and I were whisked off to our hotel to check in and then off to a dinner. The show just kept going on. It was a dinner reception in my honor. Other dignitaries were there including the local mayor and people all dressed up for the festivities. I was at the table of honor with Zack. We were both wondering how we would explain this to my son Nathan! We were treated to a big birthday cake and another great dinner before finally going back to the hotel to catch our breath and process this remarkable day. I woke up in the middle of the night, played some Springsteen on my ipod, and I stared at the ceiling of my hotel. Wide awake at 3:00 am, I wondered how this remarkable journey came about. Appropriately, my last thoughts as I drifted off to sleep were of Easter and how the world and this life are full of things we are not privileged to fully understand.